Are we through with the flu? Don't count on it

Just when it seemed North Texas might get away with a light flu season, the virus is making a late rally.

“We shouldn’t assume that it’s a milder influenza season just because we are not seeing the same volumes as saw in the 2017-2018 season,” warned JPS Health Network Chief Quality Officer Trisha Swift. “The surge we saw last early last season didn’t happen this year, however that doesn’t mean we will not have a late season peak so we should still remain vigilant.” 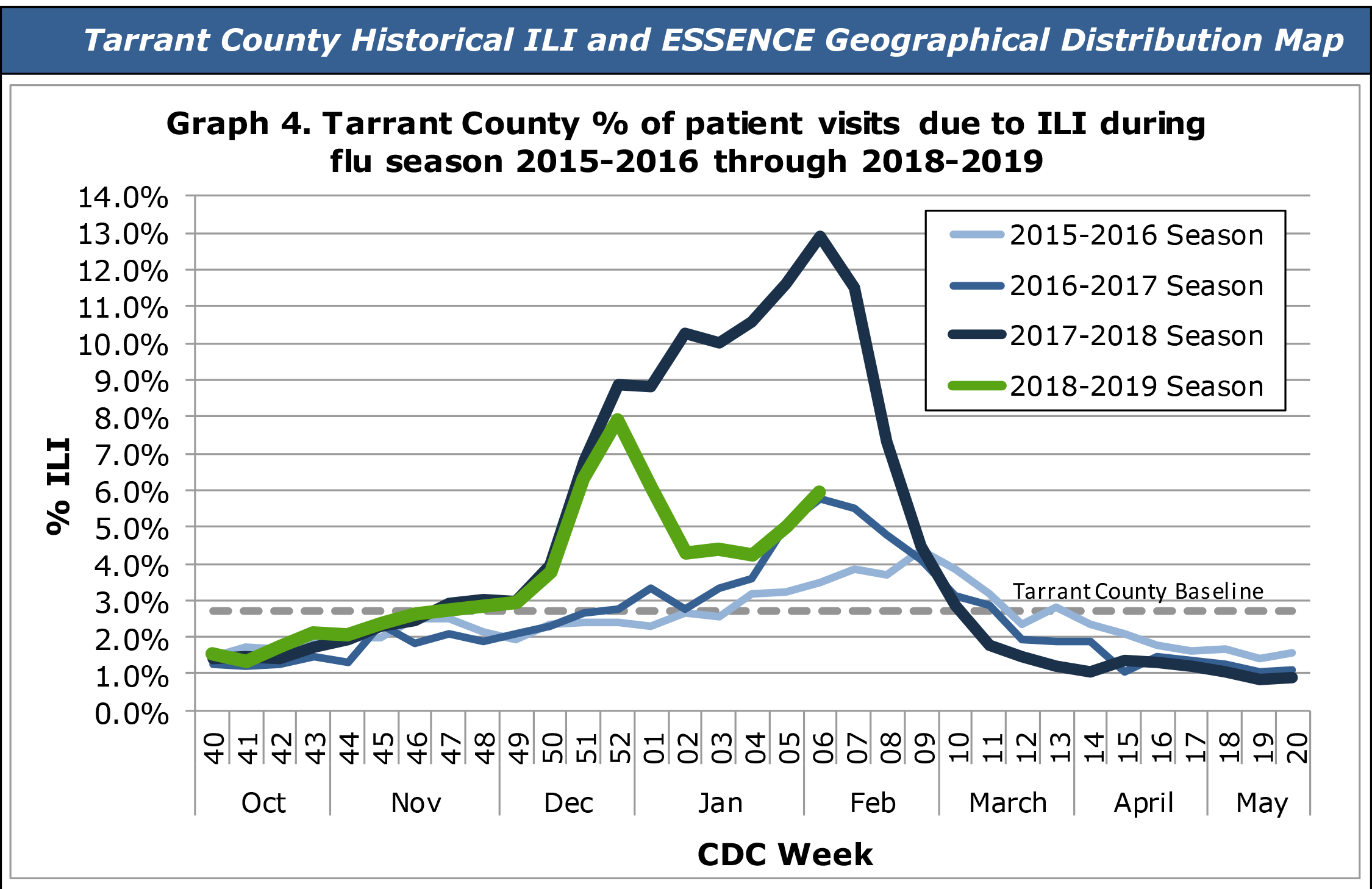 The overall percentage of people in Tarrant County who reported influenza-like illness increased from 5 percent in the first week of February to 6 percent the second week, the last full week for which statistics are currently available. The Tarrant County baseline is 2.7 percent. A total of 3,258 flu tests were administered in Tarrant County the week of February 3-9, according to the latest statistics available with 24.7 percent of them returning positive. There were 750 cases of Influenza A and 53 cases of influenza B revealed. At JPS Health Network, about 8,300 flu tests have been performed since October 7, according to Swift. A total of 2,011, or 24.2 percent, were positive.

While the number of positive influenza tests is rising at the time cases usually start to taper off and the Tarrant County Department of Public Health characterizes the flu situation in the area as “widespread,” the total number of patients inflicted with the virus is still well below the volume of patients afflicted during the 2017-18 flu season. But it has surpassed 2015-16 and 2016-17 flu season totals.

Michele Villa, RN Clinical Manager in the JPS Urgent Care Center said cases are continuing to come through the door. Fortunately, the vast majority have been mild. Because symptoms, including fever, headaches, chills and runny noses have been less severe, she suspects most people with the virus are staying home and waiting to get over it instead of seeking medical assistance. According to JPS figures, 1,564 people have been treated for the flu this season on an outpatient basis.

“Fortunately, we haven’t seen many people who are really sick,” Villa said, adding that JPS has recently stopped testing for the flu. “If they have flu symptoms when they walk in the door, we’re just going to start treating them.”

The peak of flu infections so far this season was 8 percent, recorded in the third week of December. Like the 2017-18 flu season, infections ramped up in the second half of December. The difference has been that while they kept on climbing in 2017-18 into January and February to reach a peak of 13 percent in the fifth week of 2018, they fell off pace this season just as the new year began.

Villa said there have been signs over the past few days that the tide of new cases has leveled off and is starting to recede. It is uncertain caused the influenza virus to suddenly have a resurgence. But she said there is no truth to the urban legend that the vaccination wears off and loses its effectiveness before flu season is over. The flu vaccination is designed to last the entire season, she said. But people need to get a shot every year because the flu evolves from year to year and scientists tailor the shot to best protect people from what they expect the virus to do in the next upcoming flu season.

The best thing you can do to protect yourself from getting sick is to continue to follow flu-fighting best practices like staying home when you’re sick and washing your hands frequently, according to Swift.

“Regular handwashing, particularly before and after patient contact, is the best ways to remove germs such as the influenza virus,” Swift said. “Handwashing helps all of us avoid getting sick and prevents the spread of infection to those we come in contact with. Cleaning your hands is a win for everyone -- except the germs.”