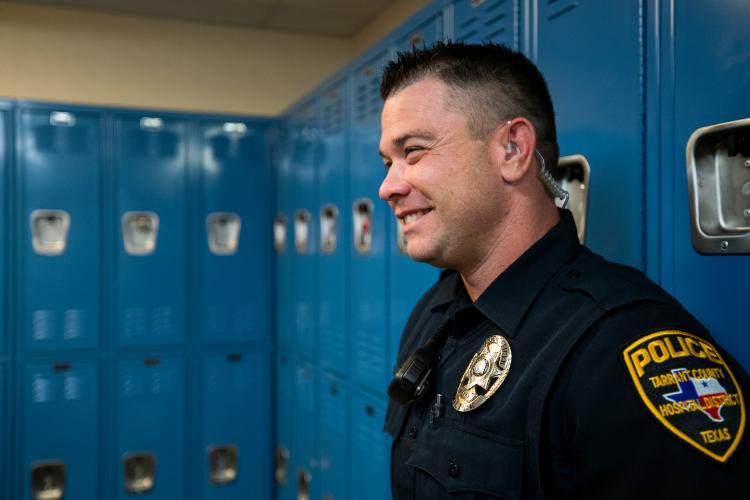 He’s the son of a retired Tarrant County Sheriff’s Department deputy, so he’s wanted to be a cop as long as he can remember. It’s not a surprise that, after working at JPS for a while, he itched to go work for a municipal police department to get a taste of what it was like working in a more traditional law enforcement environment.

“It’s a little bit different working on a hospital campus than it is working at other places,” Willyerd said. “But I wasn’t gone long before I started to think about coming back. I stayed in touch with a lot of the other officers when I was away. When I came back, in a lot of ways, it seemed as if I never left.”

The officer spent about a year away from JPS before applying to come back.

Randell Hayen, Executive Director of Public Safety and Parking Services and Police Chief of the Tarrant County Hospital District Police Department, said he’s glad to have the veteran officer back on the beat.

“Officer Willyerd is an outstanding employee,” Hayen said. “In fact, he was just selected Employee of the Month for September. Officer Willyerd is very caring, compassionate, and empathetic when interacting with our patients, visitors, and fellow employees.”

Willyerd said working at JPS is a throwback to days when officers patrolled their beat on foot instead of behind the wheel of a patrol car. He said he usually logs 7-9 miles a day while walking his rounds through the hallways at the hospital and responding to calls for assistance across the campus.

Being able to make that kind of difference is really a good feeling.

His most rewarding day on the job happened when his rounds led him to a person that had suddenly become unresponsive in the Outpatient Center waiting room.

“I was in the right place at the right time and called the Code Blue team for assistance,” Willyerd said. “They were able to get there quickly and help the patient. He was back up and at ‘em the next day. Being able to make that kind of difference is really a good feeling.”

While it’s a unique place to work, Hayen said serving at JPS allows officers to do the things they love best about being a first responder: helping and protecting people.

“I believe our Police Officers love working at JPS because it provides one of the most unique and rewarding atmospheres within law enforcement,” Hayen said. “While what we do every day is much different than traditional policing, it is still very rewarding and centers on helping people in a time of need.”

JPS has 50 sworn police officers, 16 security officers, eight police communicators and several support staff members on the job to protect patients, team members and visitors to its main campus, medical homes, clinics and other satellite facilities. Founded in 1992, the Tarrant County Hospital District Police Department has all of the authority of other police departments in Texas. Its jurisdiction covers all JPS properties and the roads that surround or pass through them.