Duo of Docs Combine for a Century of Service at JPS 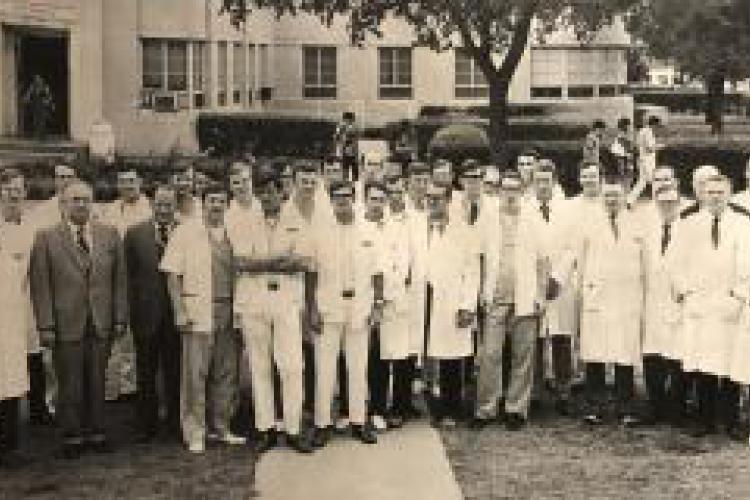 A lot has changed in the world of medicine over the past 50 years.

But one thing that has remained constant for the last five decades is that neonatologist Dr. Donald Nelms and nephrologist Dr. Kermit Olson have been making rounds at JPS Health Network, providing a combined century of service to Fort Worth and Tarrant County while training the doctors that followed in their footsteps.

The pair of doctors came to JPS at a time of big change. As the calendar turned from 1969 to 1970, John Peter Smith Hospital was expanding by leaps and bounds. They would each play a part in the transformation. Nelms is credited with building the health network’s Neonatal Intensive Care Unit while Olson was the architect of JPS dialysis services.

“They made a huge impact on the quality of care available here in Tarrant County,” said Dr. Jay Haynes, Senior Medical Director of Innovation and Integration at JPS. “It’s been a blessing and an honor to have Dr. Nelms and Dr. Olsen at JPS. They left part of their soul and part of their spirit here, their internal value system and their sense of mission. They ended up here for a reason.”

When he was recruited to John Peter Smith Hospital in 1969 by the institution’s first medical director, Winfrey Goldman, Olson said it was a much different place.

“At the time I came here in 1969, there were no nephrologists in Fort Worth,” Olson said. “So it was a good opportunity for me at that point in my career. Back in those days, we were still in the three-story, white brick building along Main Street.”

Wards in the old building were arranged in a semicircle with 16 patients in each ward.

“We had an intensive care unit there which was something not every hospital had at that time,” Olson said. “But by today’s standards, it was pretty primitive.”

Today, JPS has about 6,700 employees. Olson estimated that when he started that the total was only 250-300.

We had an intensive care unit there which was something not every hospital had at that time.

Arriving with a background as a doctor in the U.S. Army -- and with a haircut to match -- Nelms was an intimidating figure to some. He was thought of as something of a task master in the new neonatal intensive care unit he was charged with creating.

Team members used to cringe when he’d walk through the door every morning, uttering his trademark phrase: “Work, work, work.” But as the staff grew to know the doctor and recognized his dedication to the tiny babies in his care, they came to look forward to hearing those words.

RN Judy Calkins has worked with Nelms in the Neonatal Intensive Care Unit since she started at JPS 29 years ago and RN Elaine Segovia has worked alongside him for 22 years. They agreed he’s a fixture in the department who has shaped the lives and careers of countless teammates with his patience and kindness.

“He’s so dedicated and a joy to work for,” Calkins said. “He’s very thoughtful. When he goes to meetings and they have doughnuts he always brings some back for the nurses. He remembers everyone’s name and what sort of pet they have.”

Despite his catchphrase, Nelms said he doesn’t think of his job as “work” at all. He said it’s his passion and his hobby. He loves to be at the hospital where he feels like he makes a difference.

“I hit 50 years in July, but I never gave retirement much thought,” Nelms said. “I enjoy working here because there is a high level of professionalism. There has been tremendous growth and advancement in both the size of the place and in our mission.”

Olson is known by the residents who trained under him for his photographic memory. Whenever residents had questions about a patient, the doctor could cite, chapter and verse, the place where an academic article on the subject could be found.

Family Medicine physician Dr. Richard Fulkerson said he marveled for years about how Olson could remember information so specifically. A few years later, he learned that Olson kept folded up copies of the most relevant and insightful articles in his jacket pocket for easy reference.

“That’s the showman in him, I guess,” Fulkerson said. “But that’s part of what makes him a great teacher.”

Olson said one of the most important things he learned at JPS was that you always have to keep your mind open to learning new things.

“How privileged I have been to work there for such a long time,” Olson said. “I’m thankful for our house staff and also our patients who taught us both medicine and service.”