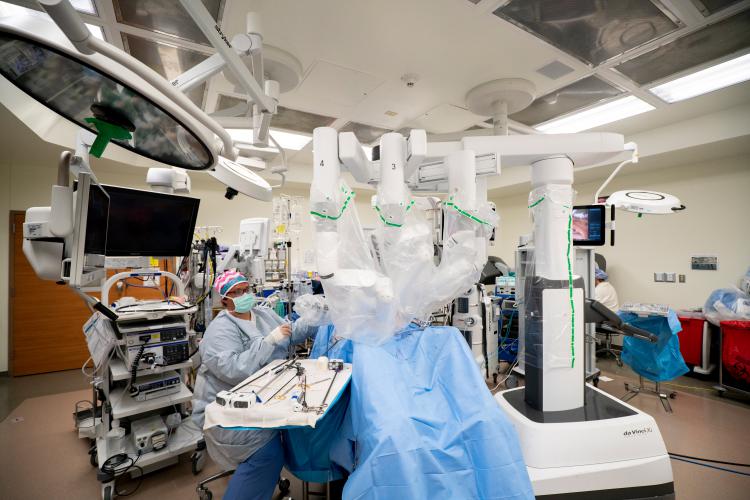 “When the da Vinci robots started to appear, a lot of surgeons and hospitals dismissed the idea,” Garcia said. “But we’ve found that they add an element of precision, allowing surgeons to get into places they couldn’t using more traditional methods. They open up a new world of possibilities.”

Garcia, believed to be the first general surgeon in Fort Worth to embrace the use of robots in operations, was attracted by the enhanced visibility the robot’s cameras offer from inside the patient and the fact that once complicated and invasive operations could be completed more safely and easily with robotic assistance. Where large incisions were once needed, the da Vinci machine can access the body through tiny openings. Less damage is done to body tissue, decreasing the likelihood of complications either during surgery or in the healing process afterward. Patients are able to get back to their lives sooner than ever before.

“They give surgeons an incredible ability to see and maneuver,” Garcia said. “The capabilities are getting greater seemingly every day and over the last five years there has been an explosion in the utility of robots.  It’s wonderful how they can spare people from more extensive operations.”

Garcia credited JPS with investing in the state-of-the-art technology early on, bringing the best care possible to its patients. The health network currently has two operating rooms equipped with the da Vinci system and leaders are considering plans for a third, according to the surgeon. “JPS acquired robots before some of the other hospitals in the area did, and that’s important,” Garcia said. “As the public hospital, it’s the place people who are less financially well off count on for their medical care. People who come to JPS have the same access to advanced technology that they could find in the finest private hospitals in the world.”

The da Vinci robots give surgeons an incredible ability to see and maneuver.

Fellow surgeon Victor Olivas, also a frequent user of the Da Vinci Surgical System, said it’s remarkable that Garcia has made it to the 1,000 operation mark.

“It’s a great resource to be able to work with someone who is so experienced in robotic surgery,” Olivas said. “We’re trying to increase the things we use the da Vinci system for, and Dr. Garcia has been a true leader with it. He has the most experience of anyone here and, likely, of anyone in the area.”

Surgical robots are used at JPS to battle cancer, to repair hernias, to cure urological and gynecological issues and to perform a variety of other operations. Garcia said he most often uses the machine to repair hernias. But it’s also an excellent tool in the battle against cancer, allowing surgeons to reach and remove tumors they might not have been able to completely get to via traditional forms of surgery.

Other uses for which the da Vinci system is well-suited include general surgeries such as appendix and gall bladder removal, prostate operations, gynecological procedures, full or partial colon removal and operations on the kidneys or lungs.

Initially approved for use by the Food and Drug Administration in 2000, there are about 4,300 of the machines in use world-wide with about 2,800 of them in the United States, according to the device’s manufacturer, Intuitive Surgical.

While the da Vinci system has revolutionized surgery, Garcia said he thinks there are still a lot of exciting changes on the horizon. One way he’d like to see robotic technology developed is by making it possible for a doctor in one country to remotely perform an operation on a patient in another part of the world.