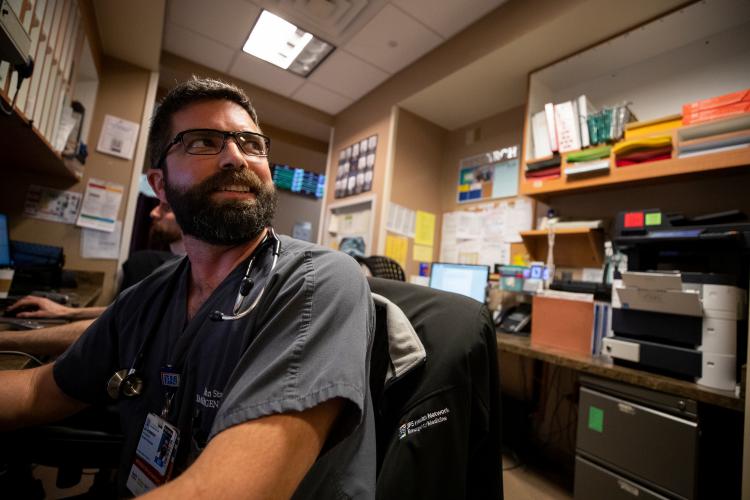 But, at 43 years old, he’s finally earned the title he’s dreamed about through all the twists and turns of his life and career: Dr. John Starwalt, DO.

“When I was a sophomore in high school we had a teacher who took us to see an open heart surgery being performed,” Starwalt said. “Ever since then, I was hooked on the idea of becoming a doctor. No matter what else I did, it was always there in the background. It almost doesn’t seem real that it’s happening.”

Starwalt, who graduated in May from the Texas College of Osteopathic Medicine, is a first year Emergency Medicine resident at JPS Health Network in his hometown. But it’s not the first time he has been employed at JPS. Starwalt worked his way through medical school as an echocardiogram tech at the hospital.

“I really see this as one of those Hallmark movie stories,” said cardiologist Darren Kumar who Starwalt refers to as a mentor and inspiration. “His drive and perseverance are remarkable. When he said he was planning to go to medical school I knew he was going to be a huge success because he’s so gifted and such a hard worker.”

Starwalt’s journey started 25 years ago with a scholarship to play tenor saxophone at Texas Christian University. But it quickly took a detour when one of the several bands he played in as a hobby suddenly got the attention of a record company. The thought of making hit records and playing concerts around the globe was too enticing to pass up.

“I really concentrated on music for a while, playing in bands until about the time that I was 30 years old,” Starwalt said. “As is the case with so many musicians, right when it seemed we were going to make it and get a record contract, it all just disappeared.”

His drive and perseverance are remarkable. When he said he was planning to go to medical school I knew he was going to be a huge success because he’s so gifted and such a hard worker.

To make ends meet, Starwalt worked in the construction industry for a dozen years. But in an effort to find something steadier – and to scratch his itch to work in the medical field – he went to school to learn how to do ultrasound tests and landed a position as a tech. Starwalt worked nights so he could go to school during the day, a schedule Kumar characterized as “brutal.”

“I couldn’t do it,” Kumar said. “It’s a lot of hours and tough courses. It’s tough enough when you’re young and that’s all you have to focus on. But it’s so much harder when you’re an adult who has to provide for yourself and your family.”

The attention to detail that made Starwalt shine in school is what makes make him stand out as a physician.

“He’s not the kind of doctor who relies on the computer algorithms,” Kumar said. “He puts a lot of thought into his work and it shows. He thinks everything through thoroughly and when he makes a decision he can explain exactly why he did it.”

While it seemed at times as if Starwalt would never reach his goal, he never considered quitting.

“I’ve come too far to give up,” Starwalt said. “But sometimes it’s hard to believe I am almost to the finish line. It seemed like it would never get here.”

“I certainly plan to lean on Emergency Department leadership to make an effort to keep him on the team,” Kumar said. “In addition to having the skills to be a great doctor, he has tremendous determination and character. He would be a tremendous asset to JPS.”