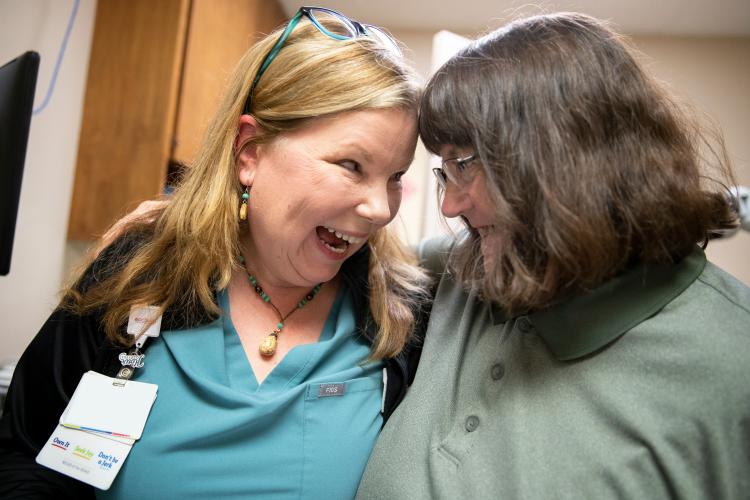 When Joyce Pierce came to JPS Health Network, a serious hernia was taking away her life bit by bit.

A bowling ball-sized protrusion of her intestines through her abdominal wall made it difficult, if not impossible, to perform even the everyday tasks many of us take for granted.

“I could barely roll over in bed, much less get any exercise,” Pierce said. “I couldn’t even hold my grandbaby. It was really difficult to do much of anything at all.”

It was a catch 22: Pierce’s weight had gradually increased over the years because of her lack of mobility, but she couldn’t get the surgery she needed to fix the problem because her elevated weight made the operation unlikely to succeed and potentially dangerous.

“I wanted to have it,” Pierce said. “But doctors told me if I had it at my weight I might not walk out of the hospital alive.”

Pierce came to the JPS Surgical Optimization Clinic about a year ago looking for the elusive answer to her health problems. There she found Nurse Practitioner Diana St. Pierre, who helps people get their weight down to a safe level – or to quit smoking – so they can have needed surgery.

St. Pierre told Pierce she could help her – if she was willing to do what it took to get the job done.

“I asked her if she was really committed to doing what she needed to do to lose weight – or if she was one of the people who say they’re committed – but don’t actually do it,” St. Pierre said. “She promised me she was, so we got started.”

Like many journeys, the first step toward weight loss or stopping smoking is often the most difficult one. But 72 percent of the time, people who reach out to the Surgical Optimization Clinic are successful in dropping their weight and 88 percent of diabetic patients maintained or lowered their blood glucose level.

I love being able to hold my grandbaby again.

Pierce stumbled out of the gate. During her first visit after starting her diet, her weight was actually higher than it was when she made her vow. But she was determined not to lose the battle to regain her health and St. Pierre helped her get started on a diet she could work with. In six months she was able to lose 50 pounds in order to be able to have hernia repair surgery. Dr. Carlos Rodriguez declared the surgery to be a success. But Pierce has kept on going, dropping a total of 67 pounds so far.

Rodriguez said patients who have a body mass index of 35 or more are likely to have their hernia operation fail because there is too much stress on the abdominal wall for the mesh used to repair the damage to hold up. He said the mesh is used between layers of muscle to build a “sandwich” of abdominal wall. If the repair failed, it could be tough to try to put everything back together a second time.

After the hernia was repaired, plastic surgeon Dr. Steven Mapula removed excess skin revealed by the patient’s weight loss because potential complications to the healing hernia – including irritation and infection -- lie within the folds of loose skin.

With Pierce’s weight loss and surgery behind her, it’s easy to forget how hard she and the Surgical Optimization Clinic team worked to help her reach her goal, St. Pierre said. She meets with patients regularly to make sure they stay on track during the lengthy process that often takes a year or more to achieve. Since the clinic opened in October 2016, more than 6,000 people have been helped in dropping weight, stopping smoking or preparing for surgery, lower their blood pressure or to control their diabetes through diet.

“It is a journey, certainly,” St. Pierre said. “The upside is that we get to partner with the patients and develop a relationship. Unlike a primary care setting, we have the luxury of spending 30 minutes or more in counseling. We get to celebrate each victory and coach where needed. The downside is that they go back to their PCP when we are done and we miss them!”