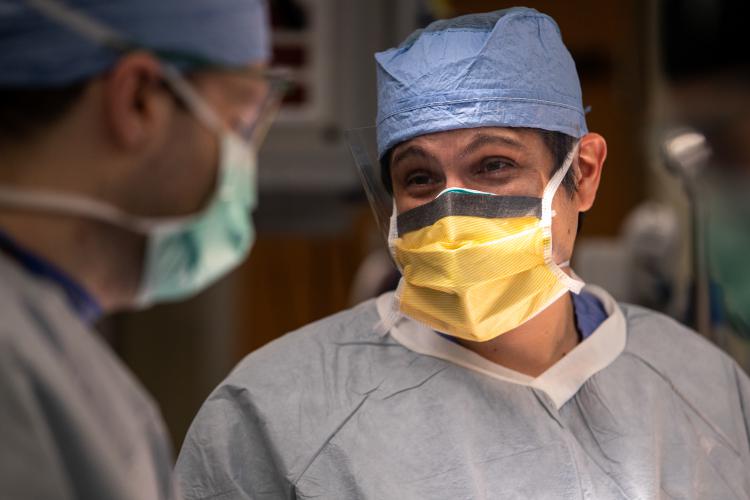 Surgeon Dr. Victor Olivas, Family Medicine physician Dr. Victor Burgos, and a handful of other doctors and professionals around the health network started their paths to JPS at North Side High School in Fort Worth. There, they participated in a Medical Professionals P-Tech Academy tailored for students who want to pursue careers in the healthcare field.

“It’s amazing to think that multiple people came from the same little high school to work at the same hospital,” Olivas, Surgery Program Director at JPS, said. “This is a really great place to work. It says a lot about this hospital that people want to work here so they can serve this community. I know it really means a lot to me.”

"My intention was always to stay here because I never really wanted to go anyplace else."

While Olivas returned to his home town about three years ago after a decade of working in El Paso, Burgos never really went away. He went to medical school at the Texas College of Osteopathic Medicine at the University of North Texas Health Science Center, then he did his residency in Fort Worth and then settled into a career at JPS.

“My intention was always to stay here because I never really wanted to go anyplace else,” Burgos said. “I think it makes a big difference in my relationships with patients that I am from here and I know who they are and where they come from.”

Olivas and Burgos both said it has been extremely fulfilling not only to provide medical care to people in their home town, but also to serve as an inspiration for the kids who are growing up now in the neighborhoods where they were raised.

“It makes you feel good to be able to let kids know that they can grow up to reach their dreams,” Olivas said. “Sometimes it seems like it’s so far away that it’s impossible to reach your goal. But if this kid who grew up poor in Fort Worth made it, they can make it, too.”

Roxanne Wueste, a Post-Secondary Specialist in the Northside High School Medical Professions P-Tech Academy, said it’s priceless to see Olivas, Burgos, and other professionals who came through their program succeed.  She said they are excellent role models for the students of today.

“It means the world to us to know that our Medical Professions Program has alumni working as doctors at JPS and serving our community,” Wueste said. “Our goal is to prepare our students to achieve their career aspirations through academic preparation and work-based learning experiences in the medical field. Seeing those dreams fulfilled is a blessing to all involved.”

Luisa Serrano, who plans to graduate high school in 2022 and then attend pharmacy school, said she’s inspired by Burgos and Olivas.

“Those who have gone through the program and have had success in their career are the perfect example of what hard work and determination can help you achieve,” Serrano said. “They are role models for us and for the next generation of healthcare professionals. The journey to a career in healthcare may seem overwhelming, but it is reassuring to see that people who have had the same opportunities as me are achieving their goals.”

Senior Diana Aguado Parra, who has received a scholarship to go to Johns Hopkins University in the fall, agreed.

“They are the most real proof that when you want to achieve something, you can,” Parra said. “Although I still have a long way to go, I know that what I am learning now will help me realize my dream of practicing medicine as these people are. I hope, for one day, to become a highly qualified individual in the medical field and serve those who need it the most.”

Burgos said it’s been more rewarding than he could have imagined to work in his home town. He said he often sees schoolmates, neighbors, and friends from his youth in his clinic.

“It’s a great benefit for me to be able to have a connection with them,” Burgos said. “When people know you understand them and where they come from, they trust you. Maybe they’ll tell me about something that they wouldn’t tell someone else, and that could be the key to making them well.”

Olivas agreed. While he enjoyed his job in El Paso, he couldn’t imagine being happier anywhere else than he is in Fort Worth.

“It’s not exactly like it was when I was a teenager," Olivas said. "But, still, there is no place I would rather be than at JPS.”