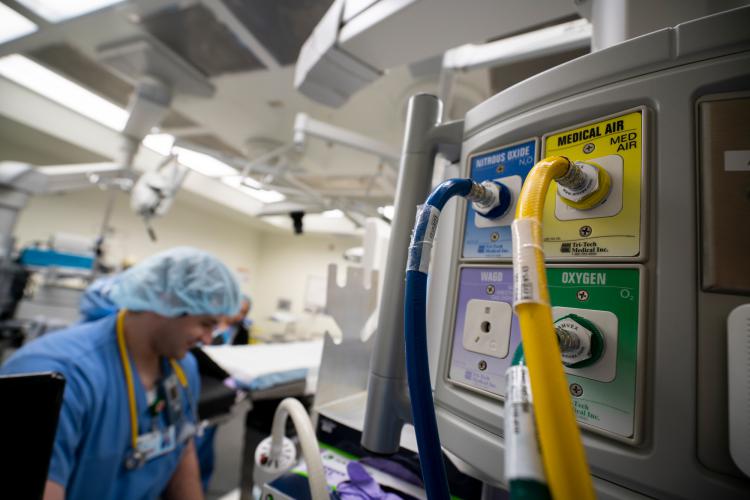 JPS Health Network is in the process of upgrading equipment in its Surgical Department to better serve patients.

Workers are replacing the 26 surgical booms in the health network’s 13 operating rooms. Plans are to complete the job in late February or early March, depending on how busy the surgical suites are, said Plant Operations maintenance mechanic Derek Baker who is overseeing the work.

Surgical booms are metal arms hung from the ceiling of the operating rooms that provide a central point to mount equipment needed to perform surgery. The booms supply operating room team members with the resources they need to get their job done, including not only multiple electrical outlets used to power equipment, but also access to gas lines including oxygen, nitrous oxide and medical air.

Because the resources surgical teams need come from above, wires and tubes aren’t on the floor where they become an obstacle that could be tripped over, according to Staci Medina, manager of Surgical Services.

“The booms have hydraulics and are a way for us to put our regularly used equipment in one place off the floor with easy access to electrical outlets without cords everywhere on the floor,” Medina said. “They are space savers.”

Baker said the booms being replaced are original to the JPS patient pavilion, which opened in 2008.

“They’ve done a good job, but they’re of the age where you can’t get parts for them anymore,” Baker said. “The new ones will be able to do all the things the old ones could do and more.”

One thing the new booms do that the old ones don’t is go up and down like a periscope in a submarine, according to Baker. The previous models rotate and pivot to get where they need to be in the OR. But they couldn’t rise up into the ceiling or extend down toward the floor.

Medina compared the new booms to replacing the tires on your car. You might not notice anything much different in their appearance or basic function, she said. But with new hydraulics and moving parts, they’ll work better just like fresh rubber will grip the road more effectively.