JPS Owns It When It Comes To Bone Care 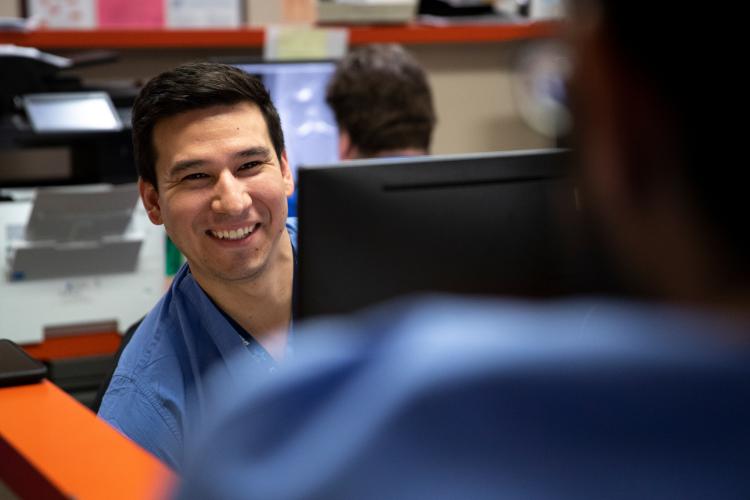 Recognized as one of the best hospitals in the country at helping prevent fractures before they happen, it is one of 71 hospitals nationwide to be designated an “Own the Bone Star Performer” in 2020 by the American Orthopedic Association.

“Preventing fractures is a very important thing and that’s why we’ve made it a priority at JPS,” said Nurse Practitioner Sheeba Thomas. “It’s important in shortening hospital stays, preventing readmissions and in improving the overall quality of life for patients.”

It’s also important in reducing medical costs for both patients and the hospital, itself, making care more effective and efficient.

That’s why, in March 2019, DNP Elizabeth Smith, Director of Surgery and Surgical Specialty Advanced Practice and surgeon Dr. Raj Gandhi, got together to create a Geriatric Trauma Program, coordinating the work of the Orthopedics and Trauma departments. It acknowledges the special needs of older patients, not only mending their fractured bones, but also tracking them in a registry and screening senior patients for the cause of their breaks, including osteoporosis.

“Patients who sustain a fracture from a ground level fall have a high likelihood of suffering another one in the future,” Smith said. “The goal is to get them through the hospital system without complications or readmission and restore them to their previous quality of life.”

"We have achieved so much at JPS in recent years. It goes to show what you can accomplish by working together."

Unlike with younger patients, fractures can be a very big deal for senior citizens, Smith said.

“When an 80-year-old person falls, it can be extremely life changing,” Smith said. “Every time that happens, and the older they get, the chance of them recovering to the same level of function they had before is slimmer.”

By screening patients, Thomas said caregivers can find out what caused them to be vulnerable to a break in the first place. Then there’s a chance to fix the problem instead of just hoping the person doesn’t fall again.

“Education is one of the biggest things,” according to Thomas. “Also, exercise, optimizing calcium and vitamin D intake. Those are some of the things we focus on. We’re also able to treat patients with medicine.”

By screening patients during regular visits, Thomas hopes patients in the future will be prevented from not just a secondary fracture, but the first one, too.

“We have patients who come in and have a ground level fall and break a wrist or a hip,” Thomas said. “Why? Because they don’t have any symptoms until they actually break a bone. It’s very important for our geriatric population to be screened. But sometimes it’s not a part of the routine checkup and, unfortunately, we don’t find out about it until they come to the hospital with a fracture. Our goal is to have any patient we see in the hospital from ED to elective joint surgery be screened.”

Smith said JPS isn’t satisfied to make the Own the Bone Star Performers list. In 2021, it hopes to greatly expand the number of seniors it reaches. The Orthopedic Trauma program plans to do that by connecting with other departments across the health network.

“By reaching out to other departments to share what we’re doing, people there can put in a referral to me to get the awareness out there so we can treat more patients,” Smith said. “We have achieved so much at JPS in recent years. It goes to show what we can accomplish by working together.”