JPS Successfully Tests Coronavirus Response: “There is an Opportunity to Learn from This” 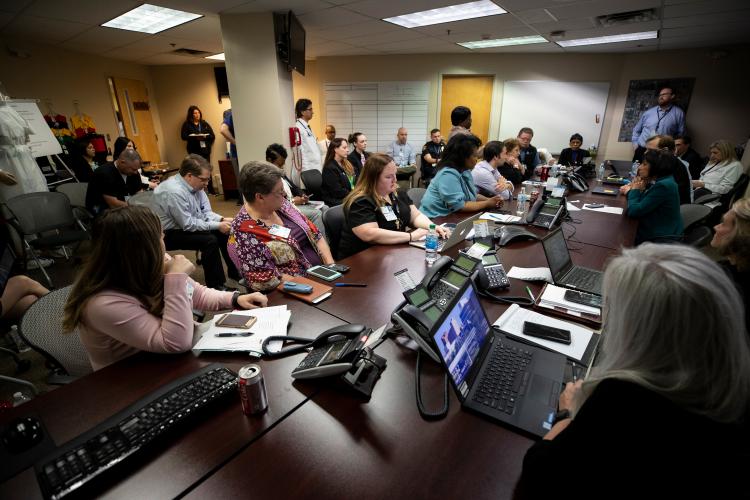 A patient who recently returned to the Fort Worth area from overseas was brought to JPS Health Network Tuesday morning, concerned about suspected symptoms of Coronavirus.

The case was quickly determined to be a false alarm. But not until after the plans the health network has put in place to respond to a potential outbreak in Tarrant County were tested in a real-life scenario. Hospital leaders were pleased with what they saw and used the experience as an inspiration to tweak their plans.

“There is an opportunity to learn from this,” said Michael Hochberg, Senior Executive Vice President and Chief Clinical Officer of JPS Health Network. “We can examine our reaction and consider if there are areas of our response we can improve.”

The Tarrant County Public Health Department was first called Tuesday morning about the patient who was concerned they had symptoms of the Coronavirus and had recently returned from a trip to Italy where the disease is widespread.

“The person said the magic words: I want to be tested for the Coronavirus,” Dr. G. Robert Stephenson, Chief Quality Officer at JPS told members of the health network’s Hospital Command Team about why county health officials advised the patient be brought to JPS.

The person arrived at JPS at about 10:45 a.m. by ambulance and was immediately taken into an isolation room in the Emergency Department where the patient was evaluated by Dr. David Bryant.

Bryant had to quickly shave his beard to properly don a respiratory mask. He then put on a clear plastic face shield and a head-to-toe protective suit before entering the isolation room with the patient. Once inside, it was quickly determined the person did not have a fever, a key symptom of Coronavirus. Instead, the patient complained for a runny nose, a cough and a sore throat, symptoms consistent with the flu.

I'm very proud of the way our team responded today. I think we did a great job when we were tested.

While interviewing the patient, Bryant determined the person was not in a part of Italy affected by the Coronavirus outbreak, specifically the Milan region. It was also determined that the patient was in Italy from February 10-16, more than two weeks ago, while symptoms only appeared about two days before the trip to the Emergency Department. JPS leaders worked closely with the Tarrant County Public Health Department to determine neither COVID 19 testing nor hospitalization were warranted in the case.

While the patient was determined to not have symptoms of Coronavirus, protocols put in place in anticipation of the disease were closely followed.

When the patient arrived, Tarrant County Health District Police cleared non-essential JPS team members and patients from the path from the ambulance bay to the negative pressure room where the patient was to be examined. A family member who did not have any symptoms of illness arrived shortly after the patient was taken to a private family waiting room to isolate them from family of other patients in JPS waiting areas.

Shortly after the patient was taken to one of four negative pressure isolation rooms in the Emergency Department, operations returned to normal, according to Bryant.

“It’s important to make sure that we are able to respond to a situation like this while still providing care to people with other health concerns,” Bryant said. “When Ebola was happening in Africa, there were still more patients with Malaria than there were people contending with Ebola. We have to be able to be ready for the people with chest pain, the flu and other health issues effectively while we respond to this challenge.”

Jesse DeWaard, Executive Director of Emergency Services at JPS, said hospital leaders are already working to analyze their response in hopes of finding areas where they can make improvements.

“You can practice and drill as much as you want, but there is no substitute for the real thing,” DeWaard said. “The events of this morning gave us a chance to put our plans into action in a real world situation, and that has given us some very valuable information.”

DeWaard said it is being considered that future suspected Coronavirus patients would be examined in the ambulance that transports them to the hospital to better contain the virus. By doing so, doctors would know if the patient had the disease before they were brought inside.

“I’m very proud of the way our team responded today,” DeWaard said. “We’re constantly evaluating our processes, so we’ll use the information from today to do that, but I think we did a great job when we were tested.”