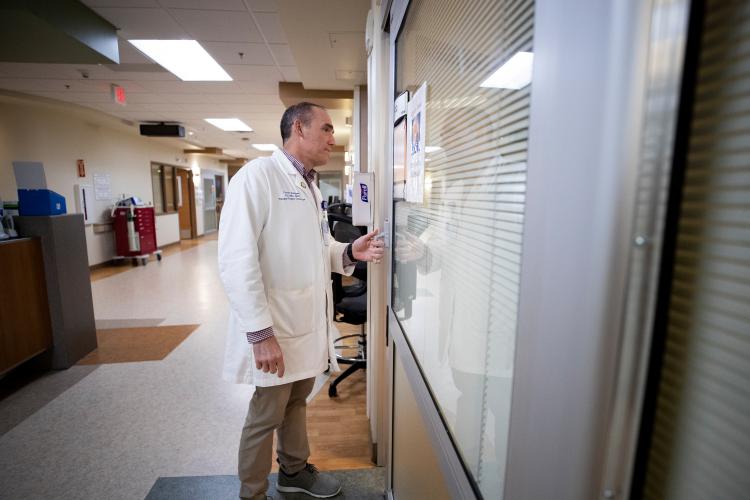 There is a big difference between trying to save the lives of Navy sailors and Marines wounded in battle and trying to solve the health issues of patients at a civilian hospital in Texas.

But Dr. Carlos Rodriguez, who retired from the Navy in 2018 after 24 years of service to become Director of Emergency General Surgery at JPS Health Network, said he has found both career paths can be equally rewarding.

“When I was in Afghanistan in 2010, we were quite busy,” Rodriguez remembered. “I was working a sunrise to sunset shift. All we really did was trauma. We were doing damage control, trying to stop the bleeding so we could get the patient to the next level of care.”

Rodriguez said more than 98 percent of patients treated in the trauma surgery center survived. But he rarely got to find out specifically what happened to patients after they left his care in a war zone. Once they left his table, they became someone else’s patient. It was a surprise when he came across someone whose life he saved. One of those patients was a young Marine who was brought in, pale as a ghost with barely any blood pressure who had suffered damage to his aorta. The Marine, who also lost both legs and an arm, showed up at Walter Reed Hospital for follow up care while Rodriguez was there as Division Chief of Emergency General Surgery from 2013-18.

Rodriguez remembered the young man’s name and told him he was the physician who performed surgery on him in Afghanistan. The Marine paused and asked what he looked like when he came into the operating room that day, gravely wounded.

“I asked him if he really wanted to know,” Rodriguez recalled. The Marine said he did.

“You were dead,” Rodriguez said in the most straightforward way he could. The Marine thought about the words for a few seconds then replied “cool” before rolling away in his wheelchair.

Unlike his days stationed in a war zone, at JPS Rodriguez works with patients from diagnosis through surgery to recovery. It’s one of his favorite parts about his new role.

It’s very rewarding to see things come together as the team cares for them.

“Medicine is medicine,” Rodriguez said. “But to have the opportunity to take care of patients the way they need and deserve to be taken care of is something that I really appreciate.”

While the cases are different, Rodriguez said the caseload isn’t.

“I’m still dealing with a high volume of patients,” Rodriguez said. “Some of them are very sick. It’s very rewarding to see things come together as the team cares for them.”

Sujit Philipose, Service Line Administrator for Acclaim General Surgery, said Rodriguez has been a tremendous addition to the surgical staff at the health network.

“We have a very talented group of physicians from different backgrounds,” Philipose said. “They’re very different but they work together to form an incredible team. What Dr. Rodriguez brings to JPS is his passion for everything there is to know about general surgery. He not only has incredible experience, but he leads in research efforts.”

In addition to his tours of duty in Afghanistan and Iraq where he performed surgery in what was previously the passenger terminal of an airport, Rodriguez also has practiced his profession on the open seas, serving as ship’s surgeon aboard the aircraft carrier USS Harry S. Truman. Ironically, when he joined the Navy in 1991, Rodriguez didn’t intend to become a surgeon. After seeing the movie Top Gun, he was determined to become a pilot like the lead character if the film, flying F-14 Tomcat fighter jets off the deck of an aircraft carrier. Instead, he ended up looking after the nuclear reactor on the submarine USS Maryland before deciding to study medicine.

While he has spent nearly a quarter of a century serving where the Navy chose to send him, Rodriguez said he’s happy to call JPS and the Fort Worth area his long-term home.

“My family and I looked all over the country for where our new home would be,” said the Michigan native who grew up in the Pittsburgh, Pennsylvania area. “We just kept coming back to Fort Worth. It was big enough to have everything we need but still small enough for that hometown feel. I love working at JPS.”