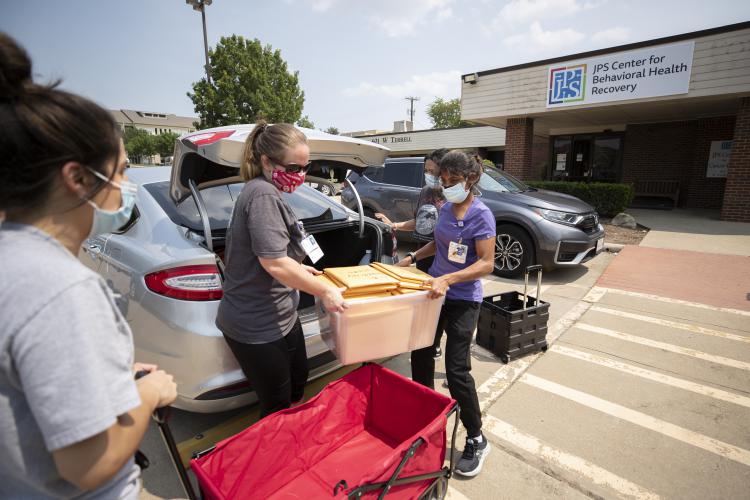 A new era of Behavioral Health care has begun at JPS Health Network.

On Wednesday, August 4, movers packed up desks, copy machines, and other equipment at the Hemphill Outpatient Behavioral Health Clinic located on the southwest corner of the JPS campus in Fort Worth. They moved it all a couple blocks to the north to 601 W. Terrell Avenue where the JPS Center for Behavioral Health Recovery opened August 9.

Some people are quick to claim it’s the people – not the buildings – which count when it comes to healthcare delivery.

“I challenge people who say facilities don’t have anything to do with the quality of care that we can provide to patients,” said Teneisha Kennard, Executive Director of Behavioral Health Ambulatory Services at the health network. “We prioritize treating our patients with dignity and respect, and this new building will show our patients our commitment to caring for them. There is dignity, respect, and a sense of worth in this new building.”

"We prioritize treating our patients with dignity and respect, and this new building will show our patients our commitment to caring for them."

Kennard said the old Hemphill Clinic has outlived its usefulness. A former nursing home, the structure had a foreboding atmosphere with a front desk behind security glass, cinderblock walls, and a lack of exterior windows. It also was difficult to maintain with a roof that leaked every time it rained and floors that frequently flooded. Kennard said she looks forward to providing care in a positive, constructive space free of the cinder block walls and mazelike corridors of the old building.

Zelia Baugh, Executive Vice President of Behavioral Health at JPS, agreed that the new site will be a huge improvement. She called it a “much more refreshing space.” She said having the new, thoughtfully planned out space will give team members the tools they need to compliment their skills.

Kathleen Newland, Manager of Psych Clinical Services said, despite its flaws, the tight-knit Behavioral Health team members will miss their long-time home. The old building has a date with a wrecking ball in the coming weeks. When it’s torn down, the site will be turned into a parking lot to facilitate the next moves in the health network’s $800 million bond construction project. Those plans are expected to include a new Psychiatric Emergency Center, new patient towers, an Ambulatory Surgery center and more.

The “new” site is actually the former JPS Cancer Center. It’s been extensively remodeled since cancer services were moved into a bigger, updated facility dubbed the JPS Oncology and Infusion Center in May 2019.

“It’s much more open and has a much better patient flow,” Newland said of the new site. “It’s a much more comfortable atmosphere which will make it a much more effective place in which we care for our patients.”

Features of the new Behavioral Health clinic include:

A demolition date has not yet been set for the old Hemphill Clinic. But once the Hemphill clinic is gone and parking is in its place, tentative Phase I plans revealed in June call for a new Psychiatric Emergency center to be built on existing employee lots closer to the center of the main campus.

Voters in November 2018 passed an $800 million bond referendum to fund expansion and renovation of JPS facilities. Plans included an additional commitment of $400 million of capital improvement funds from JPS which included the Oncology and Infusion Center and JPS Center for Behavioral Health Recovery.