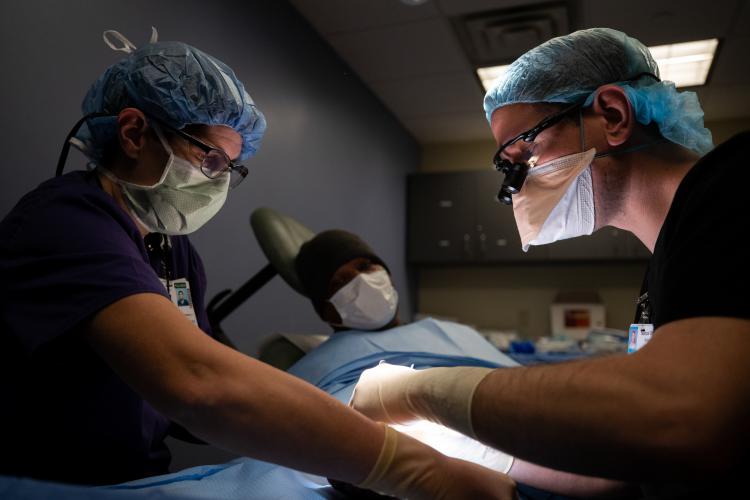 COVID-19 has made it tough for people across the country to find places where they can have a non-emergency surgery as hospitals focus their resources on caring for infected patients instead.

Fortunately for Tarrant County residents, JPS Health Network orthopaedic surgeons have found a way to bring relief to people in pain - even when they can’t gain access to an operating room.

“We’re set up now to be able to perform a number of minor surgeries in an office setting,” said Dr. Brian Webb, Chairman of Orthopaedics and Podiatry at the health network. “It’s something that is tremendously helpful, convenient, and efficient for patients.”

Orthopaedic surgeon Dr. William Pientka said he’s been performing surgeries to relieve Carpal Tunnel Syndrome, a condition in which a finger or thumb gets stuck in a bent position called Trigger Finger, to repair tendons, eliminate cysts, and take care of other minor – yet inconvenient and sometimes painful – conditions in his office.

When people arrive for treatment, they’re checked in, given a local anesthetic that numbs the area of the procedure while allowing the patient to remain conscious, and then they’re taken to a large, private room with a supportive chair like you’d find in a barber’s shop and all the equipment and resources necessary to perform a minor surgery.

"It was like one, two, three. It was over before I knew it. All in all, it was a great experience."

“It’s something patients have really appreciated, first, because they’re eager to get their issue fixed as soon as possible instead of waiting for months,” Pientka said. “Second, it’s much more efficient and lower impact to have an in-office surgery than to have in in an operating room at the hospital.”

When patients visit the OR for a hand surgery, Pientka said they have to arrive hours ahead of time to be prepped for their operation, which is done under general anesthesia. When the procedure is over, they then have to go to a recovery area where they spend time waiting for the anesthetics to clear their system before it’s safe to go home. When the in-office procedure is complete, they’re safe to drive home immediately.

“When we do an in-office surgery, because there is no recovery time, the whole thing takes a maximum of one hour from the time the patient arrives until they go home,” Pientka said. “For a surgery in the OR, it’s a minimum of three hours.”

Denise Taylor had been suffering from Trigger Finger for months. When an injection failed to resolve the problem, she found out surgery was her only option.

“Dr. Pientka told me he was offering in-office procedures now and asked me if that’s something I would be interested in,” Taylor said. “I told him I was absolutely interested, and I was excited to get it taken care of as soon as possible.”

When the date for the procedure arrived, Taylor said she checked into Dr. Pientka’s office only about 45 minutes before the operation was scheduled to start. She was taken to a private room where her finger was numbed. The actual operation took much less time than it did for the local anesthetic to kick in.

Is an in-office operation safe? According to Webb, it’s even safer than minor surgery in the OR because of the elimination of general anesthesia. Pientka said patients prefer to be awake for the procedures, many of which take five minutes or less once the patient’s hand is numbed and they’re ready to go.

Are patients reluctant to be awake during their minor surgery? Actually, much more often than not, they’re excited about it, according to Pientka.

“If you don’t want to look, you don’t have to look,” Pientka said. “We can definitely do that. But I’ve found that most patients actually want to watch.”

Taylor said, she’s recently had both in office and traditional type surgeries. She has no doubt she’d opt for the office variety if she had the choice in the future.

“It was like one, two, three,” Taylor said. “It was over before I knew it. All-in-all, it was a great experience. Because they didn’t have to put me under, I could drive myself, I could eat before the operation, and I thought it was really cool that I got to watch. It wasn’t like you might think, nothing gory or bloody. It was very interesting and I was very impressed with the whole thing.”

Webb said, as the pandemic slows, JPS will eventually resume non-essential surgeries in the traditional operating room. But he said he believes in-office procedures are here to stay because of their efficiency, convenience, and the results they offer patients.

“This is something we were planning before the pandemic,” Webb said. “While it has worked very well for patients while elective surgeries are unavailable, it’s a service our patients will benefit from long after the pandemic is over.”