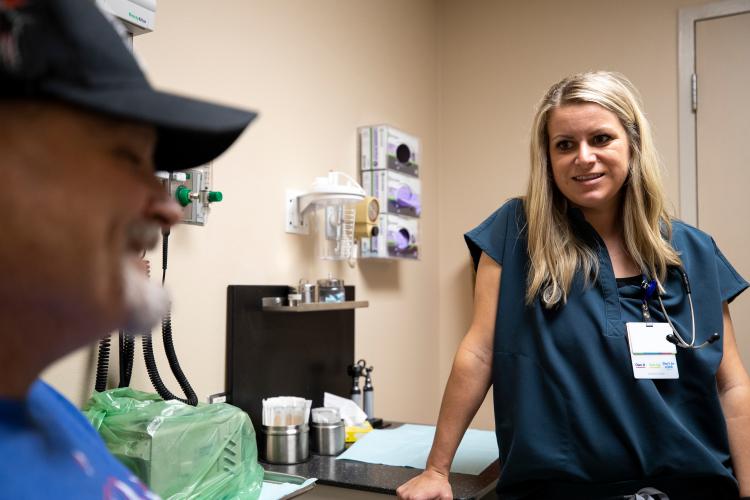 Surgery can often be the key to saving lives or making them better. A couple hours on the operating table and life-threatening issues could suddenly be a problem of the past.

But what if the patient isn’t prepared for their operation? Things like high blood pressure, complications of diabetes, smoking and obesity can sometimes make it too risky for the patient to undergo surgery. That’s where the JPS Surgical Optimization Clinic comes in.

“Sometimes we can’t help people get better if we can’t get them to surgery,” said Diane St. Pierre, APRN, ACNP-BC, CTTS, who established the Surgical Optimization Clinic at JPS in 2016. “We’re here to get patients where they need to be so they can get taken care of as soon as possible.”

The staff of the Surgery Optimization Clinic works to figure out what issues stand between patients and a surgical solution to their problems. Then they come up with a plan to fix the issues, ranging from overhauling the patient’s diet and exercise plans to reviewing and adjusting their medications.

Deb Saunders, Executive Director of Perioperative Services at JPS, estimated that as many as 60 percent of patients who come to the health network in need of surgery aren’t in optimal condition at the time of their diagnosis. In the past, the surgical team wouldn’t find out the patient wasn’t ready for their operation until they showed up at the hospital the day it was supposed to take place. If a patient was supposed to stop smoking or alter their diet before their procedure, it was up to them to handle the situation. Too many times, they didn’t get the job done.

“Diane has a way with people,” Saunders said. “She makes people understand how to succeed. I see cases where she gets diabetes under control for people who have never been able to keep it under control before.”

According to Saunders, every 15 minutes of productive time lost in the operating room costs about $6,000.

In less than four years since the clinic was established, the number of operations scheduled at JPS that had to be canceled because the patient wasn’t ready for their procedure has decreased 30 percent, according to St. Pierre. The clinic has been so successful in getting patients to care and in eliminating lost resources and wasted time from canceled surgeries, it is now in the process of relocating. Previously tucked away in a room and a half on the second floor of the Outpatient Clinic, it will move to a space just inside the front entrance of JPS’s main building. The new clinic will be about six times larger than the room it had before.

When the clinic opened, it served an average 11 patients a month. Today, it serves more than 280 people who need to lose weight, get their diabetes under control or stop smoking in order to be prepared for surgery. After it moves to its new location, St. Pierre said she believes the clinic will have the capacity to serve 500-600 people every month.

A lot of people struggle because they don't believe they can get where they need to be. We're here to coach them and support them. Their success is our success.

The Surgical Optimization Clinic has not only grown in size. It’s been growing in staff, adding a pair of nurse practitioners to handle an ever-increasing load of patients.

Claudette Cook, AG-ACNP, joined the Surgical Optimization team in April 2018. A nurse in a stepdown unit for eight years and at a private cardiology practice for two and a half years after that, she’s the cardiology expert in the clinic.

Lindsey Holden, FNP, AG-ACNP, joined the team in September. She has six years of bedside nursing experience, five of those years were in the critical care setting. She was also in the Army National Guard for over twelve years where she went from a combat medic to a commissioned officer as a nurse. She is an expert in getting infections and upper respiratory issues under control.

Why is Optimization so important for patients?

Patients who aren’t optimized for surgery can face dramatically higher rate of failure for their operations, often take longer to recover and are more likely to have an unplanned readmission to the hospital. In extreme cases, including ones when the patient’s diabetes or blood pressure is uncontrolled, surgery is canceled because it would be too dangerous.

Svetlana Zhurenkova came to JPS in excruciating back and leg pain. It was quickly determined that surgery could fix her problems and restore her to a normal quality of life. But out of control blood sugar kept her out the surgery suite, causing her to feel defeated.

“I couldn’t even go shopping because I was in so much pain,” Zhurenkova said. “The stress was so bad that I had a heart attack and they ended up putting three stents in.”

After working with the people of the Surgical Optimization Clinic, Zhurenkova has her diabetes in order. Holden noticed some issues with her medication and, by fine tuning it, was able to get her patient started on the road to recovery. Zhurenkova is looking forward to soon getting her back fixed and resuming a life without pain.

Patient Patrick Fletcher came to JPS with a large sore on his foot due to complications of diabetes. Lingering on for five months without signs of improvement, doctors thought he might have to have his lower leg amputated. The Surgical Optimization Clinic was so successful that not only did he not lose his foot, he’s healing so well that surgery is no longer necessary.

“I guess I thought I was tough and I would figure things out,” Fletcher said. “It almost cost me my foot. But they got me straightened out here now, suddenly, my foot is a lot better. I needed to get a handle on my diabetes and they did a great job of doing that.”

Patients still have to do the work to get to where they need to be. But St. Pierre said her team is there to give them a roadmap to success and the support they need to get the job done.

“A lot of people struggle because they don’t believe they can get where they need to be,” St. Pierre said. “We’re here to coach them and support them. Their success is our success.”