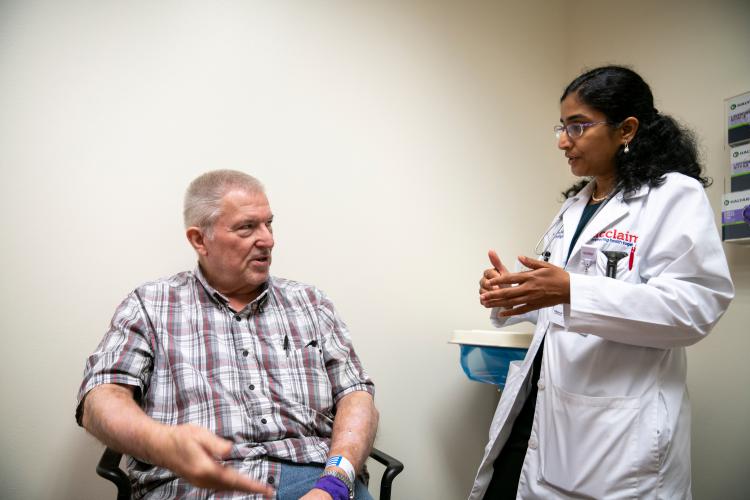 When it comes to diagnosing and treating lung cancer patients, speed is the key, according to Dr. Kalyani Narra, a physician at the JPS Health Network Oncology and Infusion Center.

“Lung cancers are particularly aggressive by nature,” Narra said.  “They can double in size in 60 days. So the sooner we can start the treatment process, the better. We’re working hard to get people to care as soon as possible.”

How did they do it?

First, more team members have been hired. JPS used to have three pulmonologists dedicated to working lung cancer patients; now it has seven. Among the additions to the team is Dr. Paras Patel, an interventional pulmonologist with cutting edge skills. Through a bronchoscopy, a procedure during which a doctor inserts a tube with a camera on its end through a patient’s bronchial tubes into their lungs, Patel can figure out what’s going on more quickly than can be done by imaging and exploratory surgery. When he finds cancer, he can place stents in bronchial tubes to keep them open while chemotherapy and other forms of treatment go to work on the disease.

Early diagnosis, especially the really early ones, greatly enhances the likelihood of survival. It affects the outcome of these cases more than anything else we can do.

“Early diagnosis, especially the really early ones, greatly enhances the likelihood of survival,” Badamosi said. “It affects the outcome of these cases more than anything else we can do.”

Dr. Bassam Ghabach, Medical Director of the Oncology and Infusion Center at JPS, said the efforts to get patients to care quicker have paid off. In 2018, only 14 lung cancer patients had their disease detected while it was still in Stage I. Over the three-month period of June through August 2019, the most recent three months the data is available, physicians at JPS have detected nine cases while still in Stage I. That’s a pace for 36 in a year, nearly triple the previous rate.

While a 25 percent reduction in the length of the process can help a patient get to treatment before their lung cancer advances from Stage I to Stage II or Stage III, Ghabach said JPS isn’t satisfied with the improvements that have already been made.

“I don’t think, in our business, you can ever afford to be satisfied,” Ghabach said. “We’re going to keep looking for ways to get people to care at the first sign there could be an issue and even before that with increased communication and screening.

“No one ever wants to hear the words that they have cancer,” said Ghabach, who called fighting lung cancer is his passion. “But if you have to have it, this is the time. There are so many things we can do today, including very promising advances in immunotherapy, that we couldn’t do just a few years ago. We’re making great strides and we’re going to keep taking the fight to cancer.”