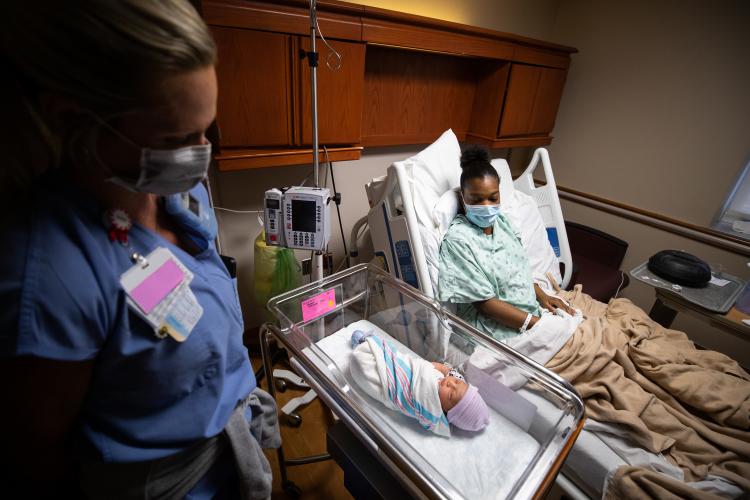 Blessings in the Middle of a Pandemic

Thanks to COVID-19, it’s been a tough nine months across the country and around the world. But it turns out that even this dark cloud has a silver lining.

JPS Health Network is experiencing something of a quarantine baby boom, seeing as many as three times the number of babies born in a shift as are expected on an average day.

“One day last week we had 15 babies born in 10 hours,” said Jessica Weathers, RN, Clinical Manager of Labor & Delivery. “It was a crazy day for sure. Usually we see five – or maybe six – babies in the shift. We think we’re going to see a lot more crazy days over the next two or three months. It’s a little bit of joy and beauty in a world that’s been pretty tough for a while.”

Jenni Tharp, RN Team Lead in Labor and Delivery, said last week marked 38 weeks since the COVID-19 quarantine started in the Dallas-Fort Worth area. So, we’re likely just at the beginning of a tidal wave of births the likes of which we’ve never seen.

“Those of us who have been around here for a while can sort of get a sense for when we’re going to have a wave of babies in about nine months,” Tharp said. “Usually after we have an ice storm, Valentine’s Day or things like that are a tip for us that we’re going to have a bunch of babies 38 weeks later. But those things are only one day events, usually. We’ve never had anything like this that goes on for months and months. So we this could go on for a while.”

This week Miriam Cruz delivered a baby girl, Naomi, at JPS. Her husband, Miguel Liera, said he didn’t really think about whether COVID had anything to do with their bundle of joy. But, upon further review, he supposes it did.

“We got married a year ago and we were planning to start a family soon,” Liera said. “I was working out of town, and I got sent home from my job when things got shut down because of the pandemic. So, I guess that helped with the timing.”

"It's important to remember that, even in these times with a lot of sadness, new life is coming into the world.”

Java Brown delivered a baby girl Tuesday evening that she named Miracle. She said timing wasn’t an issue with having her baby. She’s just thrilled, COVID-19 or not, that she was able to have her at all.

“I was told a year ago in March that I was unable to have a baby, and then a year later in March I was able to get pregnant,” Brown said. “So, I’m just happy to be able to have a baby at all, I don’t care what month it happened in or what else was going on. We named her Miracle because that’s what she was for us.”

Patients aren’t the only people at JPS who are experiencing a baby boom. Tharp said seven labor and delivery nurses and five nurses in the Neonatal Intensive Care Unit are expecting with projected delivery dates in January, February and March.

“I’m glad that, even during COVID-19, we’re able to be a happy place for people,” Tharp said of the Labor & Delivery area. “It’s important to remember that, even in these times with a lot of sadness, new life is coming into the world.”