Returning People to Homes and Health 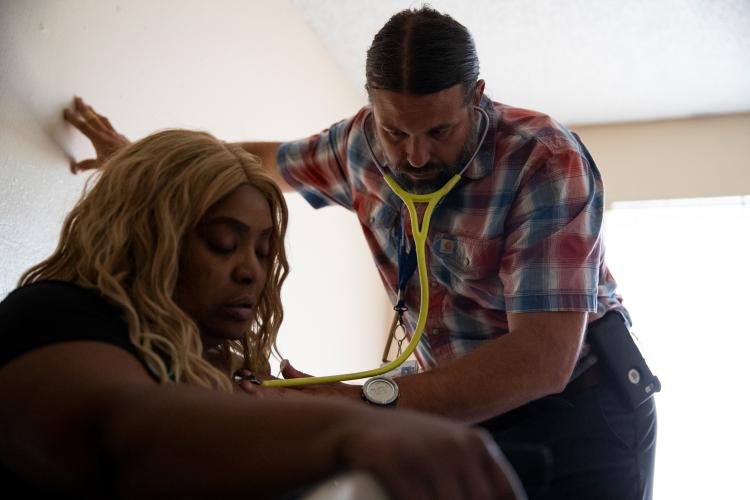 It’s no surprise that one of the most effective ways to improve the health of a person who is homeless is to find them a home.

Getting them out of the elements isn’t the only way finding a permanent place to live benefits people who have been surviving on the streets. According to Joel Hunt, Director of Care Connections at JPS, it also creates a stable environment where they more consistently take prescribed medication and make sure to keep healthcare appointments.

“Being homeless greatly reduces a person’s lifespan, and the longer they’re homeless, the greater the impact it has on their health,” Hunt said. “It’s important to get people into housing whenever we can.”

JPS has teamed up with community partners the Tarrant County Homeless Coalition, the Salvation Army and Amerigroup to find permanent residences for homeless patients through a program called Pathways to Housing. People successfully placed in the program get a voucher for rent and utilities, plus they’re connected with local food pantries to make sure they have enough to eat. Hunt said, once they’re qualified, the formerly homeless person is eligible to remain in the program for life, though some leave it after they get on their feet.

So far, about 45 people have been helped into a permanent home by the program including Cynthia Johnson who got an apartment in July after a series of health problems and bad breaks caused her to lose her job, see her marriage come apart and end up living in her car for two years. She suffers from seizures and back problems, requiring her to take 11 different medications a day.

It’s important to get people into housing whenever we can.

“Dealing with my seizures is like walking on eggshells,” Johnson said. “Sometimes it seems like it doesn’t take much to set them off. It’s tough enough to deal with my health problems on their own. Being homeless, it was tough. Really tough. I love my new place.”

Getting people off the street isn’t only good for their health. It’s good for the health of others – and the fiscal health of JPS, too. Why? Because people who are in a stable lifestyle are less likely to end up in the Emergency Department.

According to JPS Manager of Data Analytics Somer Blair, a basic visit to the Emergency Department can cost upwards of $600. People experiencing homelessness who come for emergency care once a week cost a minimum of $2,400 a month to care for – more than the cost of renting a small apartment and paying for utilities. Some homeless patients visit the Emergency Department much more frequently than that. By working with its community partners, JPS is able to help people get off the streets and vastly improve their quality of life while being a good steward of precious resources at the same time.

While the program is still early in its existence, Blair said preliminary returns show it’s working to stabilize the health of homeless patients while making their care more financially efficient. According to Blair, people who have found homes through the Pathways to Housing program come to the Emergency Department about two-thirds as often as they did when they were experiencing homelessness.

Hunt said the Pathways to Housing program is a great example of using resources wisely so everyone can win in the effort to provide care to people living on the streets.

“The goals of the Pathways to Housing Program are to stabilize housing, increase income of people living in poverty and to enhance self-determination for chronically homeless individuals,” Hunt said. “We can do this – and we can do it by reducing the financial strain on the healthcare system, making sure there are resources available to allow us to help more people.”