The Save of a Lifetime, Twice 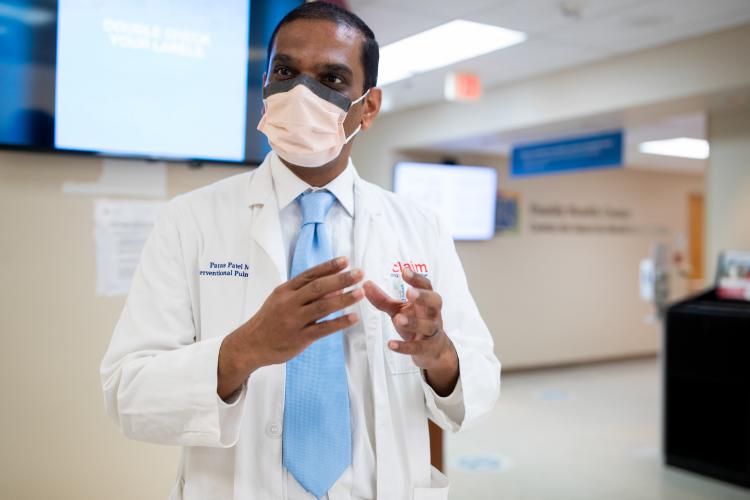 With world class doctors and nurses on the team, lives are saved on a regular basis at JPS Health Network.

Elson Perez, 28, just didn’t expect the team at JPS to save his life twice in a period of a couple of months.

“It was pretty bad,” Perez said. “First, I was on a ventilator, my family not knowing if I would survive COVID. Then, when it seemed like I was finally getting better, things suddenly got much, much worse.”

Dr. Paras Patel, an interventional pulmonologist, said Perez originally arrived at the health network in April with a serious case of COVID-19 that left him intubated for more than two weeks and hospitalized for a month. It was a Catch-22: Being on the ventilator that long was necessary to keep Perez alive as his body attempted to battle back from COVID-19 infection. But lengthy stays on a breathing machine can damage patients’ lungs and airways both profoundly and permanently.

The scarring from an extended period on a ventilator was causing Perez’s trachea to slowly close.

"I'm so grateful that I have my life back,"
-- Elson Perez

“Usually, the airway should be about 20 mm in diameter,” Patel said. “His was down to more like 3 mm. It was basically like trying to breathe through a straw. Something had to be done because it was only going to keep getting worse until his airway eventually closed completely.”

Pulmonologist Dr. Steven Davis said he remembers coming to Perez’s room to check on him and hearing the patient’s labored breathing from outside the closed door.

“I came in and asked what was going on,” Davis recalled. “He told me he was just wheezing a little bit. He wasn’t wheezing. What he was doing was suffocating.”

The lack of oxygen made it nearly impossible for Perez to perform the simplest of tasks. He couldn’t play with his four-year-old son. He couldn’t walk across a room without requiring 10 minutes to rest afterward. Unable to even finish sentences without stopping for a breath in the middle, he needed a miracle.

Patel, who was honored as a Healthcare Hero in January by the Fort Worth Business Press for his work clearing cancerous tumors from patients’ lungs to allow time for chemotherapy and radiation to do their work, had an idea. He used a pair of similar techniques to help Perez. But instead of removing tumors, he took out scar tissue, clearing out the patient’s airways to allow oxygen to reach his lungs. Called laser ablation and balloon dialation, Patel used a bronchoscope to burn away excess tissue that had grown to close Perez’s airway. He used a balloon to further open the airway and then injected steroids into the bronchial tissue to cause it to relax and stay open.

“The results are instantaneous,” Patel said. “The patient can go home the same day. When he arrives at the hospital, he can barely breathe. When he leaves, everything is perfectly normal.”

The results are nothing short of amazing, according to the patient.

“It was a night and day difference,” Perez said. “I’m so grateful that I have my life back.”

While the concept of the treatment is simple, the work is very precise and requires a great deal of expertise. Patel said major blood vessels line the bronchial tubes and trachea, so he has to be very careful not to damage them while he works. The balloons that expand the airway block it off as they do their work. So Patel has to be quick and efficient. He’s the only doctor who performs the procedures at JPS and one of very few who does the work in the Dallas-Fort Worth Metroplex.

Patel said he’s honored to be able to offer the services. There’s really no other way around them because ventilators damage the trachea so high up that a tracheostomy won’t work. Even if it did, the doctor said the relief would be temporary because the scar tissue would grow to close it up.

“I think this is something we’re going to see more of in the future,” Patel said. “Because of COVID, a lot of people are requiring ventilator assistance as they recover. This allows them to reclaim their life instead of losing it. I’m so glad I am able to do this for people.”